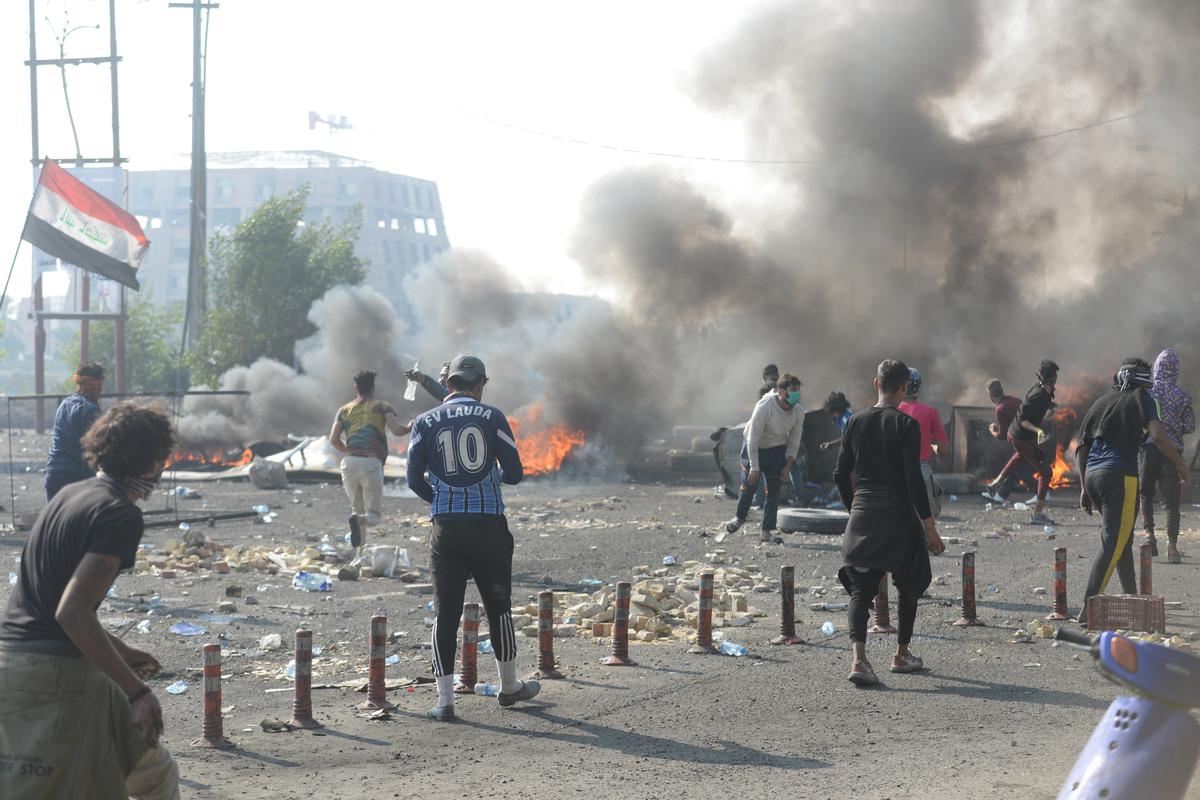 BAGHDAD/NAJAF, Iraq (Reuters) – Iraqi security forces shot dead at least 45 protesters on Thursday after demonstrators stormed and torched an Iranian consulate overnight, in what could mark a turning point in the uprising against the Tehran-backed authorities.

At least 29 people died in the southern city of Nassiriya when troops opened fire on demonstrators who blocked a bridge before dawn on Thursday and later gathered outside a police station. Police and medical sources said dozens of others were wounded.

Four people were killed in Baghdad, where security forces opened fire with live ammunition and rubber bullets against protesters near a bridge over the Tigris river, the sources said, and twelve died in clashes in Najaf.

In Nassiriya thousands of mourners took to the streets, defying a curfew to bury their dead after the mass shooting.

Video of protesters cheering in the night as flames billowed from the consulate were a stunning image after years in which Tehran’s influence among Shi’ite Muslims in Arab states has been a defining factor in Middle East politics.

The bloodshed that followed was one of the most violent days since the uprising began at the start of October, with anti-corruption demonstrations that swelled into a revolt against authorities seen by young demonstrators as stooges of Tehran.

“With attention to the recent events and the unrest in the country of Iraq the Mehran border has been closed from tonight,” Mojtaba Soleimani, the manager of the border post said, according to Mehr.

He said it was not clear when the border would reopen.

In Najaf, a city of ancient pilgrimage shrines that serves as seat of Iraq’s powerful Shi’ite clergy, the Iranian consulate was reduced to a charred ruin after it was stormed overnight.

The protesters, overwhelmingly Shi’ite, accused the Iraqi authorities of turning against their own people to defend Iran.

“All the riot police in Najaf and the security forces started shooting at us as if we were burning Iraq as a whole,” a protester who witnessed the burning of the consulate told Reuters, asking not to be identified.

Another protester, Ali, described the attack on the consulate as “a brave act and a reaction from the Iraqi people. We don’t want the Iranians”.

But he predicted more violence: “There will be revenge from Iran, I’m sure. They’re still here and the security forces are going to keep shooting at us.”

Iran’s foreign ministry condemned the attack and demanded “the Iraqi government’s firm response to the aggressors”.

So far, the authorities have been unyielding in response to the unrest, shooting dead hundreds of demonstrators with live ammunition and tear gas, while floating proposals for political reform that the protesters dismiss as trivial and cosmetic.

Prime Minister Adel Abdul Mahdi has so far rejected calls to resign, after meetings with senior politicians that were attended by the commander of Iran’s Revolutionary Guards’ Quds Force, the elite unit that directs its militia allies abroad.

Abdul Mahdi on Thursday summoned a senior military commander in Dhi Qar province, where Nassiriya is located, to Baghdad to explain why the situation had deteriorated, a military statement said.

In a statement that indicated more violence was to come, the military commander of the Popular Mobilisation Forces (PMF), an umbrella group of paramilitary groups whose most powerful factions are close to Iran, suggested the overnight unrest in Najaf was a threat to Shi’ite clergy based in the city.

The paramilitary fighters would use full force against anyone who threatened Iraq’s most senior Shi’ite cleric, Grand Ayatollah Ali al-Sistani, commander Abu Mahdi al-Muhandis said in a statement posted on the PMF website.

“We will cut the hand of anyone trying to get near al-Sistani,” he said.

Influential populist cleric Moqtada al-Sadr issued a fresh call for the government to resign, while warning those who torched the embassy that they risked provoking a violent backlash from the authorities.

“Do not give them cover to end your revolution, and stay clear of religious sites,” he said in a statement on Twitter. If the government does not resign, “this is the beginning of the end of Iraq,” he said.

Fanar Haddad, senior research fellow at the National University of Singapore’s Middle East Institute, said the government and its paramilitary allies could use the consulate incident to justify crushing the demonstrations.

“It sends a message to Iran, but it also works to the advantage of people like Muhandis,” he said. The paramilitaries could use the consulate incident as “a pretext to clamp down, framing what happened as a threat against Sistani.”

Sistani himself has appeared to back the protesters since the unrest erupted, calling on politicians to meet the popular demands for reform.

Authorities set up “crisis cells” in several provinces to try to restore order, a military statement said on Thursday. They would be led by provincial governors but include military leaders who would take charge of local security forces.