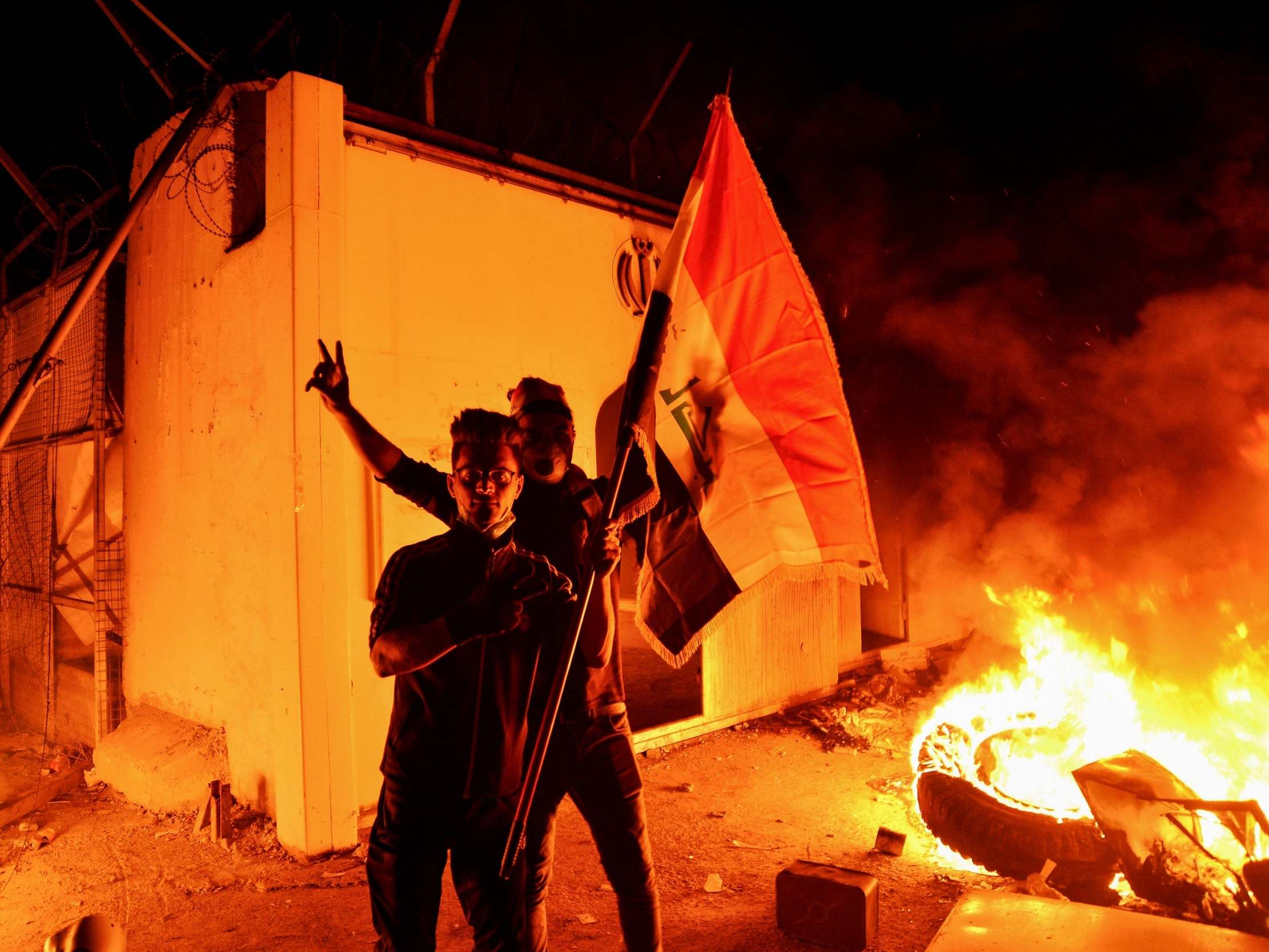 Iran has condemned the burning of its consulate in the Shia holy city of Najaf as Iraqi security forces escalate violence against protesters who increasingly see the Iranian authorities as responsible for the repression.

Anti-government protests that started on 1 October now in large part resemble a general uprising by the Shia majority in southern and central Iraq. The government crackdown has seen at least 350 people killed and 15,000 injured. A further 28 protesters were shot dead, 24 of them in the city of Nasiriya, and 165 were injured overnight.

In Baghdad, four protesters were killed and 22 were wounded, officials said on Thursday.

Sharing the full story, not just the headlines

The protesters who broke into the consulate in Najaf allowed the Iranian employees to escape unharmed but took down the Iranian flag and replaced it with an Iraqi one. Elsewhere in Najaf, and in other southern Iraqi cities, they staged sit-ins, blocked roads and closed highways leading to Iraq’s two main ports at Umm Qasr and al-Zubair.

In the wake of the burning of its Najaf consulate, Tehran called for a “responsible, strong and effective” response by the Iraqi government.

Baghdad has vigorously but vainly tried to curtail news of the protests and of the killing of protesters by snipers, with the moment of their deaths often captured by phone cameras. Although some nine TV channels have been shut and the internet closed for long periods, the suppression of information has turned out to be futile because unrest is too widespread to be isolated.

The burning of the Iranian consulate in the holy city of Najaf is particularly significant because it is the home of the Shia religious authorities headed by the Grand Ayatollah Ali al-Sistani. Its destruction is a sign that many Iraqi Shia have abandoned any sense of religious solidarity with Iran as a Shia state. Sistani has issued statements calling for government reforms and an end to violence by the security forces, but to no avail.

The Iraqi political elite also appears to have concluded that it faces an existential threat and must crush the protests using all means possible. The burning of the Iranian consulate in Najaf – one of the two Shia shrine cities, the other being Karbala and both visited by millions of Iranian pilgrims every year – marks a fresh stage in the escalation of the crisis.

It is likely to provoke an even more violent reaction by the Iraqi military which says that it is setting up special military-civilian “crisis cells” to “impose security and restore order”. This is despite the fact that shooting demonstrators dead has been counterproductive and only served to fuel popular anger.

The protests began on a small scale two months ago with demands for government action to provide jobs, end corruption and provide essential services such as electricity and water. The rallies were not unprecedented and there had been mass demonstrations with similar demands in Baghdad in 2016 and Basra in 2018, but in neither case had there been significant loss of life. This year, however, Iraqi riot police and pro-Iranian paramilitary forces opened fire into the crowds, killing at least 10 people on the first day.

This violent overreaction by the authorities turned a small protest into the biggest threat to the political status quo in Iraq since the US invasion and the fall of Saddam Hussein in 2003. From the beginning, snipers have shot unarmed protesters through the head and chest; paramilitary squads have wrecked TV stations and invaded hospitals treating injured protesters to beat and detain them. The correct number of fatalities is unknown, but is likely to be much higher than that admitted by the authorities.

The repression is reportedly being masterminded by the Iranian general Qassem Suleimani, the commander of the al-Quds force of the Revolutionary Guards. He appears to have prematurely activated pre-planned counter measures to be implemented by Iraqi government officials and paramilitary commanders close to Iran long before street protests posed any real threat to the status quo.

The fact that demonstrations are all in the Shia heartlands and not in Sunni or Kurdish areas makes them particularly threatening to the Shia ruling elite. This has long had a reputation for syphoning off Iraq’s oil revenues, but for a long time many Shia were more concerned about the existential threat posed to their community by Isis.

The defeat of Isis in the nine-month long siege of Mosul in 2016-17 made Iraqi Shia feel safer, but it also allowed them to express their rage at lack of employment and basic facilities, despite their living in one of the world’s great oil producers, whose oil revenues totalled $7bn in a single month earlier this year. Ominously, Isis claimed responsibility for three bombs in Baghdad – the first for months – that killed five people earlier this week.

Iran is likely to double-down in advocating – and probably orchestrating – increased repression as unrest continues to spread. Iranian leaders and their allies in Iraq promote a conspiracy theory, in which they most likely believe, that portrays anti-government and anti-Iranian attacks as the work of the proxies of foreign powers such as the US, Saudi Arabia and United Arab Emirates. Given this interpretation of events, the repression can only get worse.